Probably the most important golf lesson you can learn

Etiquette is a word that’s often heard in relation to golf, more-so than with any other sport. But it’s not just about manners.

The guidelines for good golf etiquette are what they are for several very important reasons: Many of them relate to the safety of golfers, many relate to pace of play (which helps keep the game enjoyable), and other rules of golf etiquette relate to maintaining the quality of the golf course.

In other words, golf etiquette is an essential part of the game. And it’s something that newcomers to the game often learn as they go - on the course, when playing with more experienced golfers.

If you are new to the game, or just need to brush up on your golf etiquette, here are some basic rules of the road that will help keep the game enjoyable for you and those around you.What people can expect during a round of golf, from beginning to end:

• Do not swing your club until you know that others in your group are at a safe distance. Likewise, keep your distance when others are swinging. Be aware to steer clear of trouble.

• When practicing your swing, never swing in the direction of another player. There may be pebbles or twigs or other matter in the grass that could fly up and injure a playing partner.

• Do not hit the ball until you are certain that the group ahead of you is out of range.

• If your ball appears headed toward another player or another group, give them a warning by yelling out, “Fore!” (an internationally recognized alert)

• Observe the safety suggestions posted in golf carts and drive carefully. Golf etiquette requires keeping your cart off the grass as much as possible.

• Never throw clubs in anger. In addition to being rude and childish, it could also be dangerous.

• Keep the round moving by being prepared to hit your shot when it is your turn. You probably don’t like waiting on other groups - don’t make other groups wait on you.

• The player who is away hits first in a group. However, in friendly matches (as opposed to tournament play), this rule can be ignored in favor of “ready play” - players hit as they are ready. All players should agree to “ready play” before it is put into effect.

• Do not spend too much time looking for a lost ball, particularly if there is a group behind you ready to play. If you insist on taking the full five minutes allowed in the rule book to look for lost balls, golf etiquette says wave up the group behind to allow them to play through.

• Always try to keep pace with the group ahead of you. If space opens in front of you, allow a faster group to play through.

• When two players in a cart hit to opposite sides of a hole, drive to first ball and drop off that player with his club, then drive to the second ball. After both players hit, meet up farther down the hole.

• When walking from your cart to your ball, take a couple clubs with you. Taking only one club, then having to return to the cart to retrieve a different club, is a huge time-waster.

• Always leave the putting green as soon as your group has finished putting.

Be Kind to the Course

• Observe cart rules. Some courses will post “cart path only” signs; others will ask you to observe the “90-degree rule.” Do as you are told.

• Keep carts away from greens and hazards. The wheels on carts can damage these sensitive areas.

• Repair your divots in the fairway.

• Repair your ball marks on the green.

• Always rake sand bunkers after hitting to erase your footprints and damage to the area where your ball was.

• Avoid taking a divot on a practice swing.

• Do not yell out following a shot. Even if boisterous behavior doesn’t bother your playing partners, there are other people on the course who may be within earshot.

• Be aware of your shadow on the putting green. Don’t stand in a place that causes your shadow to be cast across another player or that player’s putting line.

Fixing ball marks on a green is necessary and the right thing to do. When a golfer chips a shot to the green on a hole, they often come in high so the ball will stay on the green. 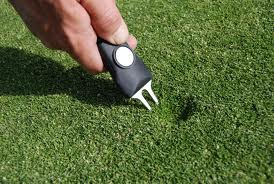 When they do that, it often leaves an indentation of the ball in the soft green. Quite often the ball will hit and roll away from its initial landing spot and most times it will roll towards the hole. Which if you were the golfer that does this, the ball mark you left on the green won’t affect you because you will be putting away from the mark. But what about the next golfer?

If you are an experienced golfer, you will fix your mark and any more you see around your mark. It takes just a moment and it helps keep the green in shape. The golf green is often the only flat spot on a course that matters. It is also the most expensive part of the course to create and maintain.

Facilities include an 18-hole championship golf course, driving range and practice green, plus a Pro Shop, Snack Bar and Lounge with a deck and patio.

Our fully licensed clubhouse and deck offer a great view of the 600 yard long Par 5 first hole. Our spacious patio gives you a view of the 18th green.

The golf course is available for charity and corporate golf tournaments